Antarctica is the 7th continent on the planet and has been manless for thousands of years. This continent comprises ice only followed by extreme temperatures which have made it quite difficult for humans to establish settlement over here. However, a few research teams have been to Antarctica and explored this icy continent to an extent only. In terms of numbers, Antarctica is huge. Let’s find out how. Antarctica is a huge continent which is about 5.4 million square miles. As far as this area is concerned, the continent is the driest among all continents despite being surrounded by water. The main reason is that there are no water supply mechanisms on this continent. Internal sources of water are very limited. Talking about 5.4 million square miles, 98% comprises land while 2% is water. Antarctica is not a country nor is there a government system existing over here. However, several researchers live over here. Special settlements with controlled temperatures have been made over here to live without any problems as well. The total population comprises 3517 people among which the majority belongs to the USA, Argentina, and Russia which account for 2,389 people. The remaining population is from other countries such as Japan, Italy, France, Australia, and Chile. 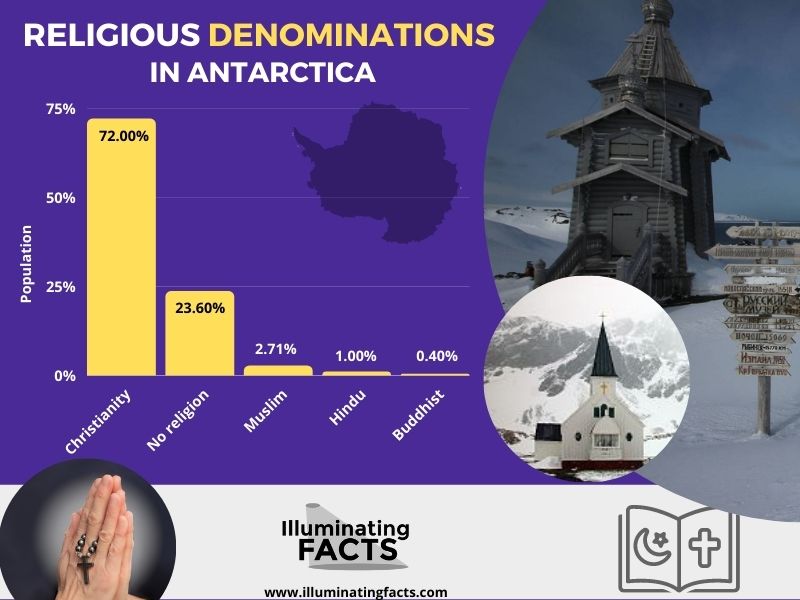 Although Antarctica is not a continent where any religious preaching or proceedings occur, the population still is categorized based on the religious denominations. This could be useful in the future if people start to settle on this continent. 72% of the people in Antarctica are Christians while 23.6% believe in no religion or Atheism. 2.71% of the population over there follows Islam, 1% for Hinduism, and 0.4% are Buddhists.