At one point in time, all electricity was made in a very simple way. Electricity was generated by burning wood or other material, and it was sent through wires that would lead to our homes and businesses. However, times have changed dramatically.

It is important to make your organization as environmentally friendly as possible in the modern world. An easy way to start this is to produce your own green power. Let’s look at which countries are leading the way with green power. 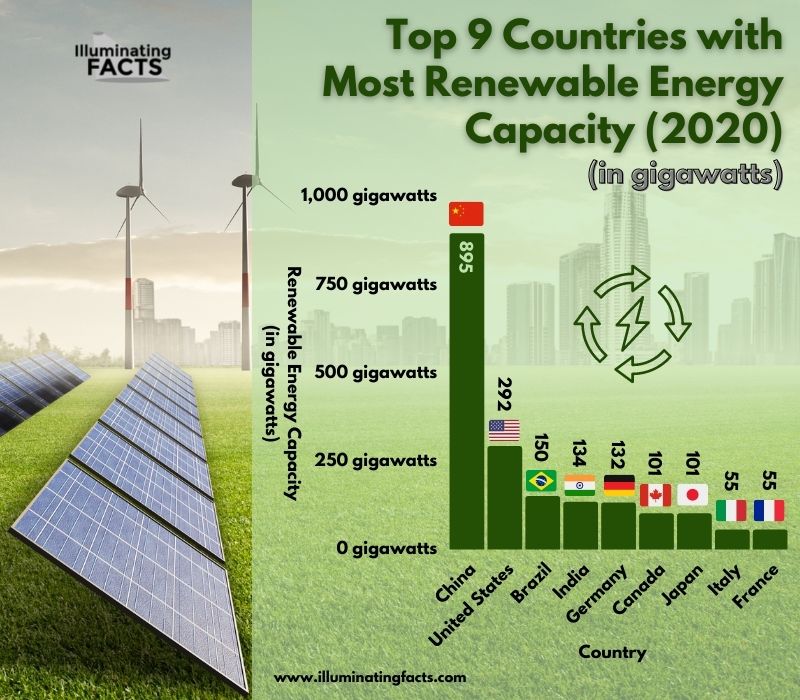 China boasts the world’s largest installed capacity of wind power and has become the world’s leading producer of solar photovoltaic (PV) cells. According to a report by Navigant Research, three Chinese companies made it into the top 10 solar module makers in 2011. A number of domestic manufacturers have benefited from Beijing’s target to obtain 20% of its energy from non-fossil fuel sources. [2]

The United States is by far the world’s second-biggest producer of renewable energy, thanks to large hydropower and biofuels sectors, as well as wind power. It also has one of the largest solar industries in the world, though it lags behind first place in China.

The US is expected to pass the EU in installed photovoltaic capacity within a few years. The US also has nearly a quarter of the world’s geothermal capacity, which generates power from steam produced by underground heat sources. [3]

But America’s reliance on coal still keeps it from leading in renewable energy generation.

The US falls short of many European countries in its percentage of electricity coming from renewables despite being one of the world’s largest producers of renewable energy overall, according to a 2015 report by the IRENA. [4]

Brazil has become the third-largest producer of renewable energy in the world, according to a new report by the International Energy Agency (IEA). [5]

The country produces its green power via hydroelectricity, which makes up almost 70% of its power production. The majority of Brazil’s population lives in just three areas: the southeast coastal region, the south, known as the pampas, and the northeast, where you’ll find Salvador and Fortaleza. These areas are home to roughly 90% of Brazil’s hydropower plants because they’re located near rivers.

While there are many advantages to this type of power generation — in addition to being clean and renewable, it is cost-effective — hydropower production can also negatively impact local communities and ecosystems by causing deforestation and flooding.

Brazil is also leading in biofuel production, with ethanol fuel from sugarcane being used as vehicle fuel. The Brazilian government is investing heavily to increase ethanol production and enable its use in cars. The Brazilians are already driving flex cars that can run on 100% gasoline or 100% ethanol, or any combination of both. Ethanol is often produced from sugarcane or corn and does not have the disadvantages that fossil fuels have when it comes to pollution.

India has the fourth-largest installed capacity for wind power, and it’s the third-largest producer of solar power in the world. [6], [7]

According to Central Electricity Authority, India produces about 40% of its total electricity from non-fossil fuel sources. [8]

Much of Germany’s success can be attributed to its Feed-In Tariff System (FIT), which guarantees producers of renewable energy above-market rates for their electricity and lets them sell into the grid at a fixed price, regardless of market conditions. These laws have encouraged many Germans to invest in rooftop solar installations and helped make solar one of Germany’s largest sources of renewable energy. [11]

Canada has a long history of producing power from renewable sources. Since the early 1900s, hydroelectric power generation has played a significant role in providing electricity to Canadians.

The majority of Canadian electric utilities are publicly owned and/or regulated, so the federal government has been able to influence how electricity is produced over the years. Canada is the second-largest hydroelectricity producer in the world, accounting for 59.3 percent of the country’s electricity supply. [12]

In recent years, wind power has been growing rapidly in Canada, but it still only accounts for 6 percent of our total energy production. However, with an installed capacity of 13.4 gigawatts, they rank sixth for wind power generation among all countries worldwide as of 2022. [13]

Japan relies heavily on nuclear energy, which produces very little greenhouse gas emissions but is controversial because of safety concerns and the disposal of waste products. Most of Japan’s nuclear reactors are offline due to public pressure after the Fukushima disaster in 2011

In 2019, renewable energy sources accounted for 6% of Japan’s total energy consumption and more than 15%, or 146 TWh, of the country’s total electricity generation. [14]

Japan is also increasingly looking to develop offshore wind projects to boost its share of renewables in the energy mix. There are a number of large-scale offshore wind farms being planned in Japan, including the 3GW Choshi project in Chiba Prefecture and a 2GW offshore wind farm in Akita Prefecture. Both these projects are expected to be operational by 2035. [15]

While most countries’ green energy production relies primarily on wind and solar (with a few exceptions like the US, South Africa, and the United Kingdom), some countries are finding more creative ways to produce their renewable energy.

Italy is probably the most interesting country in this regard. The country has about 35% percent of its green power coming from hydropower, but it also has over 6.115 percent coming from waste. [16], [17]

The country is also investing heavily in solar projects. The Italian government has been offering tax incentives for homeowners and businesses to install solar panels on their buildings. [19]

The remaining power comes from fossil fuel sources. France produces more than 500 terawatt-hours (TWh) of electricity per year, but only 23.34% is produced using renewables. France plans to produce 40 percent of its electricity from renewable sources by 2030. [21]

To sum things up, these rankings are based on the amount of solar, wind, and hydroelectric power each country is capable of producing. The countries that are higher on the list are the ones that have been able to develop their renewable energy capacity while sending less fossil fuel power towards their grids.

With the knowledge of which countries lead the world in green power production, companies can better plan their investment strategies. The information compiled here can help investors learn which new companies they should look at when investing in renewables and energy storage. Investors can also use this information to create a better picture of the overall renewable energy market around the world.