Cows comprise one of the largest populations of herbivores on Earth. As the use of cows is in different sectors such as farming, milk industry, leather industry, and meat industry, their production is high all over the world too. As a result of this, there has been a constant increase in the demand for cows which has also promoted cow farming on a larger scale as well. For this reason, we can see that the cow industry has become a multi-billion dollar industry globally. From the following graphs, we can evaluate the cows in the form of numbers. The cattle population all over the world has stayed constant with not much increase or decrease. Only minor fluctuations have been observed. This is one of the most important reasons why we can say that the prices of beef meat have increased over time. The population has increased while the cow population has stayed fairly the same. In 2012, there were about 1001 million cows which declined gradually to the lowest possible amount of 969 million in 2015. It then came up with an increase as well and in 2021, the global cattle population was again at 1000 million. The cattle population is there all over the world and spread in a quite diversified manner. India comes on top of this list with 305 million cows while all others have less than 100 million cows. The main reason why India has such a large population of cows is that cows are considered sacred in Hinduism so they are not used for the purpose of eating on a large scale. The US and European Union both have 95.5 million cows while China has 95.6 million cows. All other countries have quite a small number of cows with them. Australia, New Zealand, and Russia are also having over 10 million cows each. The US is one of the biggest markets for cows. There are farms all over the US. However, some states have this trend more than others which is why the prices of beef are cheaper in these states compared to others. The most cattle is in Texas which accounts for 13 million cows followed by Nebraska having 6.8 million cows. Kansas is also close with 6.35 million cattle while Oklahoma has a 5.3 million cattle population. California has 5.15 million cows. All other states have less than 5 million cows which include Missouri, South Dakota, Iowa, Wisconsin, and Colorado. Top Beef Producers in the World 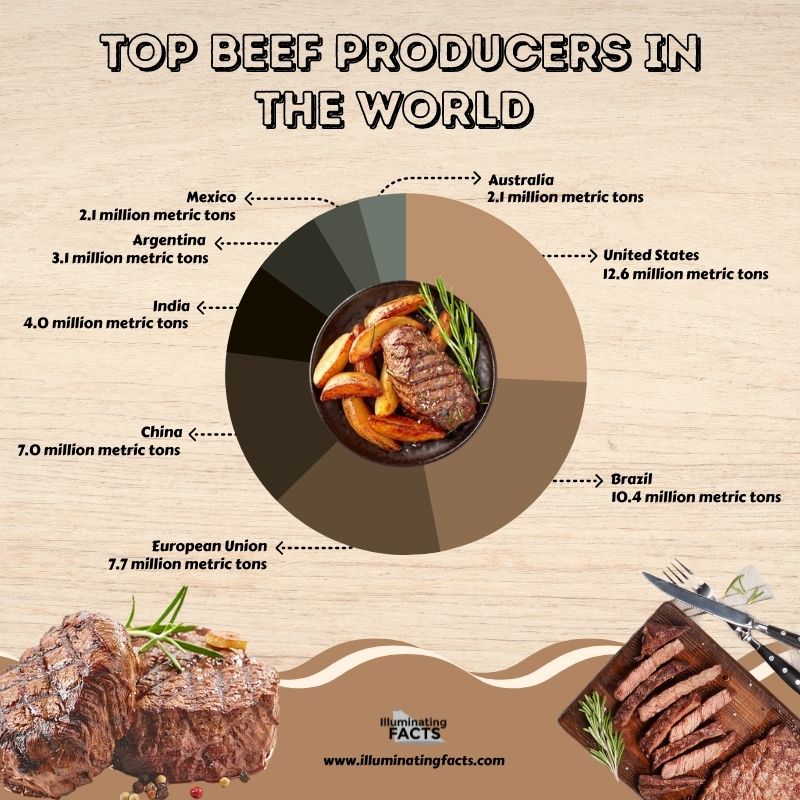