The very thought of bugs might make some people shudder, but the truth is that we all have to live with these little creatures to some extent. Bugs can be found everywhere; they’re on every continent and even on our bodies! Whether we like it or not, many homes will have bugs inside them, especially if there are any plants around.

However, these ubiquitous bugs are very interesting creatures. Some of them might even be beneficial to us in many ways. Since we have to co-exist with bugs in any case, we should find out as much about them as possible. The facts below will help you get a start on the world of bugs:

1. The Oldest Bug on the Planet is saved in the form of a Fossil The fossil of the oldest bug known to humans is preserved safely. This bug is a 425-million years old millipede discovered on the island of Kerrera in Scotland. This oldest bug is older than any insect, creepy-crawly, or arachnid found by humans. [1]

2. Harvester Ant is the Most Venomous Bug of All The most venomous bug in the world is not some large-sized bug with giant tentacles on a frightening mouth. In fact, it is instead a type of ant called harvester ant or Pgonomyrmex Maricopa. It belongs to the rare kind of ants that sting. These ants are up to five to seven millimeters in length and live in arid chaparral habitats.

Harvester ants are primarily found in the Southwestern regions of the US. [2] The rarest insect known to humankind is the land lobster. It belongs to the family of grasshoppers and crickets. The land lobsters were quite prominent in numbers around their native island, Lord Howe Island, and could be found everywhere.

However, they are now extinct as a significant part of their population was destroyed in 1918. A big steamship was stuck at the island shore in 1918, and the rats on the ship escaped and attacked the land lobsters. Since then, the species of this rarest insect has been endangered. [3]

4. Bugs Outnumber the Population of Humans on The Planet Have you ever wondered how big this population of tiny insects or creepy-crawly is? Let us state it in the easiest ways to understand. There are about 200 million bugs for every human living on this planet! It is only an estimate, and the actual numbers could be higher, as there might be numerous other species humans have not discovered yet.

Another frame of reference to understand how the population of bugs outclasses humans is that there are approximately 300 pounds of bugs for every pound of human! [4]

5. Insects are Delicacies in Some Countries, Such As Mexico Insects are also delectable delicacies in some countries, including Japan, China, Hong Kong, Mexico, etc. In Mexico, for instance, ant eggs are consumed as delicacies in butter. They also consume locusts covered in chocolate and worm candies.

A popular alcoholic drink in Mexico is called Oaxaca, which is sold under the name of mezcal. It contains worms in it and is quite popular in the country. [12]

6. Insects Breathe Through Their Bodies Insects do not have lungs or breathe in air through their nose or mouth. Instead, they have a bunch of network tubes called trachea running throughout their exoskeleton. Their bodies have small openings in the thorax and abdomen through which the air exchange occurs via diffusion. These tiny little openings on the exoskeleton running along the stomach are called spiracles. [5]

7. The Strongest Insect is the Dung Beetle While ants are well-known for carrying heavy weights and managing to do quite laborious work, they are not the strongest among all insects. Instead, the dung beetle is known to have an astonishing ability for carrying weight as heavy as 1,141 times its body weight. [13] Another interesting fact about bugs is related to the sensitivity of the feet. Common houseflies have extremely sensitive feet and they can easily detect something sweet anywhere. Scientific assertions declare that the feet of the houseflies are about 10 million times more sensitive than a human tongue. [14]

9. Adult Ticks Can Grow Up To the Size of a Small Marble if Not Killed Typically, the life cycle of ticks comprises three main stages, similar to most insects – larva, nymph, and adult. The size of the ticks varies at every step, and an adult tick can grow up to the size of an apple seed or a small marble if it is not killed.

The largest tick known to humanity is the American dog tick, also called Dermacentor variabilis. It is usually found in the eastern states of the US and often in some parts of the west coast. [6]

10. Dragonflies Were Also Present in the Dinosaur Era If worms are properly coddled, they can spin cocoons for a long time; and a single cocoon yields one strand of silk measuring up to several thousand feet. About 2,000 to 3,000 cocoons eventually end up producing one pound of silk. [7] Every day, we witness many bees swarming across from one place to another. Interestingly, bees can cover very long distances while flying every day. They can fly up to about 6 miles every day.

13. Honey is Not Easily Made in Just a Few Hundred Trips In a single flight from the hive to the flowers, a honeybee visits 50 to 100 flowers to collect nectar for honey. [16]

14. Some Bugs Can Easily Survive Winter Not all bugs live in warm environments. Some winter bugs have a mechanism to manage cold by replacing water in their bodies with glycerol. Glycerol is a chemical that helps protect their bodies from cold weather by acting as an anti-freeze. [17]

15. You Might Mistake a Brazilian Hawkmoth Caterpillar with a Snake Brazilian HawkMoth is a green morph caterpillar that has a unique defense mechanism. This HawkMoth can quickly transform itself into a pit viper when startled or attacked. It puffs out their rear bodies resulting in the surfacing of their yellow, white, and black spots.

With its faux reptilian scales and eyespots, it indeed appears as a serpentine creature to ward off its predators. [8] 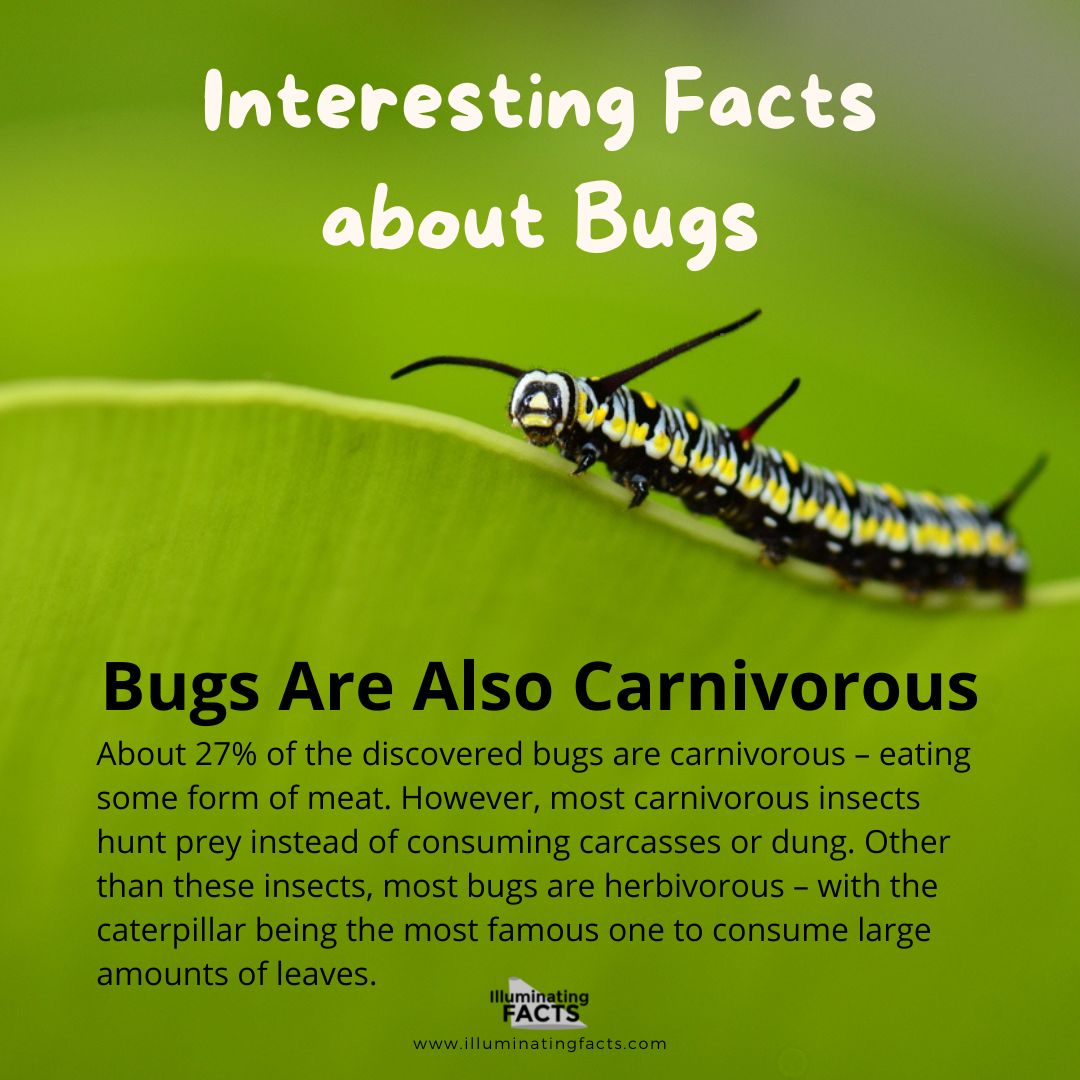 About 27% of the discovered bugs are carnivorous – eating some form of meat. However, most carnivorous insects hunt prey instead of consuming carcasses or dung. Other than these insects, most bugs are herbivorous – with the caterpillar being the most famous one to consume large amounts of leaves. [9] Ladybugs are generally well-known for their bright colors and otherwise harmless nature. However, farmers love having ladybugs on their farms as these bugs feast on other bugs, such as aphids. An average ladybug consumes about 5,000 insects in its lifetime. [10]

18. A Single Colony of Honeybees Can Produce About 10-200 Pounds of Honey During spring, one colony of honeybees has about 10,000 to 15,000 bees. This colony comprises the queen bee, the worker bees, and the drone bees. About 556 worker bees strive to gather a pound of honey.

One such colony of honeybees can produce 10-200 pounds of honey every year. [11]

19. An Assassin Bug Piles up the Carcasses of Ants it has consumed on Its Body to Ward off the Predators As assassin bug, also called Acanthaspis petax, has a unique mechanism to ward off its predators. It stacks all the dead bodies of ants it has consumed on its body to confuse the predators. [18]

20. The Red Postman Butterfly Develops Poison in Its Body by Eating Toxic Plants It grows up to half an inch in size in its adult life and has a distinctive white mark on the body accompanied by black spots and long spines. It is a solitary insect that does not mate and might only live in small groups of 2 to 3. [19]

Bugs are very common in all parts of the world, and we encounter them every now and then. They’re often hard to get rid of as a result of their superior survival instincts, and this is not even mentioning how quickly they breed after hatching.