Did you know that cats can’t taste sweetness? Or that the way we perceive a cat’s purr is actually how they communicate with other cats? Cats are fascinating and diverse, making them the ideal subject for a list of interesting facts. This list will showcase stand-out facts about cats and their behaviors, some of which may surprise you.

1. Cats and Tigers Both Have 95.6% of the Same Genes. They Also Like to Mark Their Territory, Hunt for Food, and Pounce! You’d think that cats and tigers are very different creatures, but they share an incredible amount of genetic makeup. House cats share 95.6% of their genome with tigers. They also share the same behavior habits, such as scent marking, prey stalking, and pouncing.

In addition, evolution altered several genes responsible for digestion and metabolism in the majestic felines, which may have evolved over millions of years to allow them to eat a meat-only diet.

Genetic mutations found in big cats enabled them to be carnivores. The researchers also identified mutations that allow snow leopards to live at high altitudes [1].

2. Cats Can Jump Higher Than You Expected! Cats are known for their agility, but did you know that they can jump up to five times their height? This means if your cat were 1 foot tall, it could jump up to 5 feet in the air!

A video of a cat jumping to touch a suspended cotton ball 7-8 times the cat’s height was reportedly recorded as part of a study. Moreover, in the Guinness Book of World Records, Waffle from the US is listed as having the longest horizontal jump for a cat at 7 feet. [2]

3. A House Cat Can Run to the Speed of about 30 Mph over Short Distances, Which is faster than Superstar Runner Usain Bolt in a 200 Meter Dash!

Why are cats so agile? It’s all because of their anatomy. They have flexible joints that make it easy for them to twist and turn, in addition to their razor-sharp claws acting as grip-enhancers when running, jumping, or climbing.

At top speed, Usain Bolt reached about 30 miles per hour as he set his records. A cheetah, in contrast, can reach a top speed of 70 mph and maintain it for about 200-300 yards. Usain Bolt’s world and Olympic records place him somewhere between 30th and 35th on the all-time fastest land animal list, behind the whitetail deer, warthog, grizzly bear, and house cat. [3]

4. Cats Have 32 Muscles in Each Ear that Help Them Swivel Their Ears to Pinpoint the Exact Location of a Sound Cats have 32 muscles in each ear, making it possible for them to rotate it in any direction. They also have a self-correcting reflex that comes from a tiny chamber in the ear. When a cat falls or jumps, this chamber helps keep its head level to the ground, so it always lands on its feet [4].

5. The Whiskers on A Cat Serve As Touch Receptors (Or A “Kitty Radar”), Allowing A Cat to Detect and Respond to Changes in Their Surroundings These specialized hair are called vibrissae, and they’re located above the eyes, next to the nose, along the jawline, and around the mouth.

These whiskers help cats navigate in the dark and hunt for prey by helping them determine distance. If a cat can’t see you when you walk into a room, they’ll know you’re there from feeling your way around with their whiskers [5].

6. Cats Usually Sleep an Average of 15 Hours per Day, Which Means That a Cat Spends Roughly 70% of Its Life Sleeping 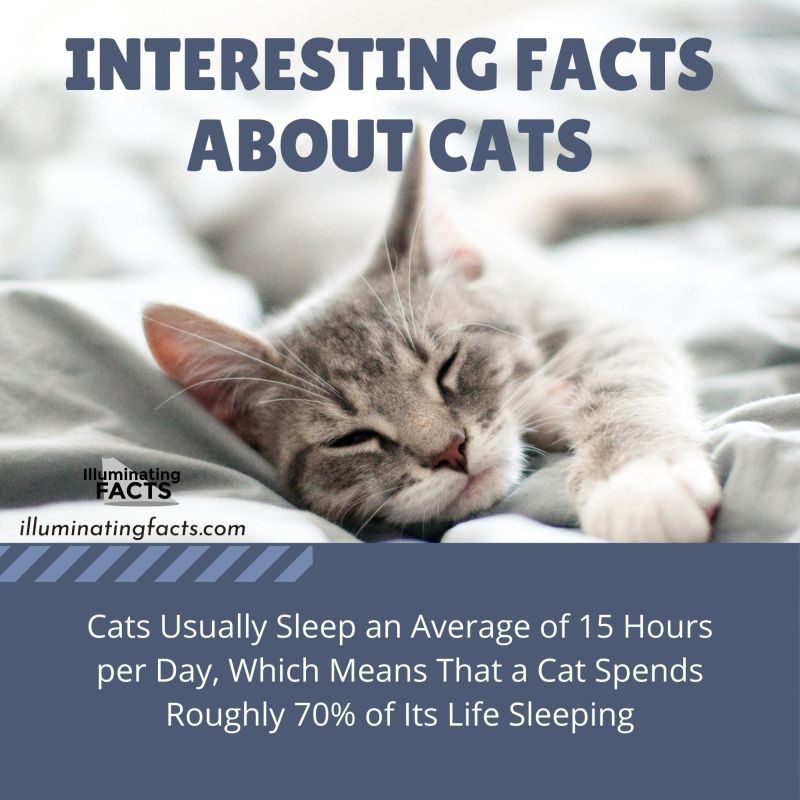 The first thing you should know about cats is that they are nocturnal, meaning they sleep most of the day and are active most of the night. They are like lions that sleep during the day and hunt at night. Although house cats have been mainly domesticated, they’re still wild at heart.

You might be tempted to believe that cats are always frisky and frolicking. But, deep down, they’re just like us. And when the weather is cold and dreary, they stay in bed all day under the covers and snooze [6]. No matter how much of that sweet nectar you give your cat, it will always be disappointed.

This is because cats don’t have a receptor that allows them to taste sweetness. A genetic mutation in the Tas1r2 gene has resulted in a mutation in certain proteins involved in the sense of taste, thereby affecting the perception of sweet things [7].

However, the good news is that cats can still detect other flavors just fine—they just won’t get any enjoyment out of their meals if they’re all sugary.

8. A Cat’s Front Paws Step Almost Exactly in the Same Place as Their Back Paws Did Before. This Reduces Noises and Tracks to a Minimum If you’ve ever been around a cat while it was walking, you know that they are largely silent animals. They only make any noticeable noise when they vocalize or scratch the furniture. But did you notice the lack of other sounds, such as thudding from each paw hitting the floor? That’s because cats have developed an ingenious way to walk without making much noise. To walk stealthily, cats arch their backs, keeping their bodies low to the ground. They move slowly and lightly, with one paw on the ground at a time.

Cats are both hunters and hunted since they can be prey to other species, so they tend to move quietly to sneak up on their prey and remain undetected by predators [8].

9. Cats Have Both Short-term and Long-term Memory. Also, They Can Easily Remember What Happened 16 Hours Ago Pets can remember many things—from knowing where to find their food and how to use the litter box to recognizing people they haven’t seen in years. [9] The average human has 9,000 taste buds, but cats are born with only 473. However, their sense of smell is much stronger than their sense of taste. If the kitty’s food is too cold, she won’t eat it. Kitty’s wild ancestors ate freshly killed prey; today, your cat lives in a warm house and often has food from the refrigerator, which she probably won’t like. [10]

Therefore, try heating your kitty’s food to spice up her appetite if she isn’t gobbling down her meal.

11. Cats Can’t Go Back Down a Tree Head-first Because They Have Their Claws Facing the Same Way, So They Have to Scoot Back Down Cats can climb down from high places, but the problem is that some of them don’t know how. To do it, they face the wall and step down backward, holding on with their claws. Some cats can do this easily. Others have no idea what to do and try to climb down head-first like they usually do. Their claws only dig in smoothly when they are up, not down [11].

12. Cats Spend One-third of Their Lives Cleaning Themselves and Sleeping Yes, cats spend almost one-third of their lives cleaning themselves and sleeping. We have discussed their sleeping habits above, but why do they always clean themselves? Well, it is due to several reasons. For example, to avoid detection by dangerous predators, groom themselves for health and comfort, give themselves baths, keep wounds clean, stimulate blood flow, or just relax [12].

13. Some Evidence Suggests That Domesticated Cats Have Been Around Over Thousands of Years In ancient Egypt, cats were considered and worshiped as gods and kept as mousers and good luck charms. French archaeologists have shown that our relationship with cats may have begun much earlier. A 9,500year-old gravesite discovered on the Mediterranean island of Cyprus held the remains of a human and a cat (buried), along with polished stones, seashells, and other decorative artifacts [13].

14. A Cat Called Stubbs Was Elected as the Mayor of Talkeetna, Alaska Stubbs, a cat, was the elected mayor of Talkeetna, Alaska, for nearly 20 years. Stubbs was a demanding yellow and orange hedonist with zero qualifications for the position but was popular among many locals.

Unconventional as he was, Stubbs led a fairly scandal-free reign until he had a run-in with an unleashed dog [14].

15. The Longest Cat Ever Recorded Was 48.5 inches long 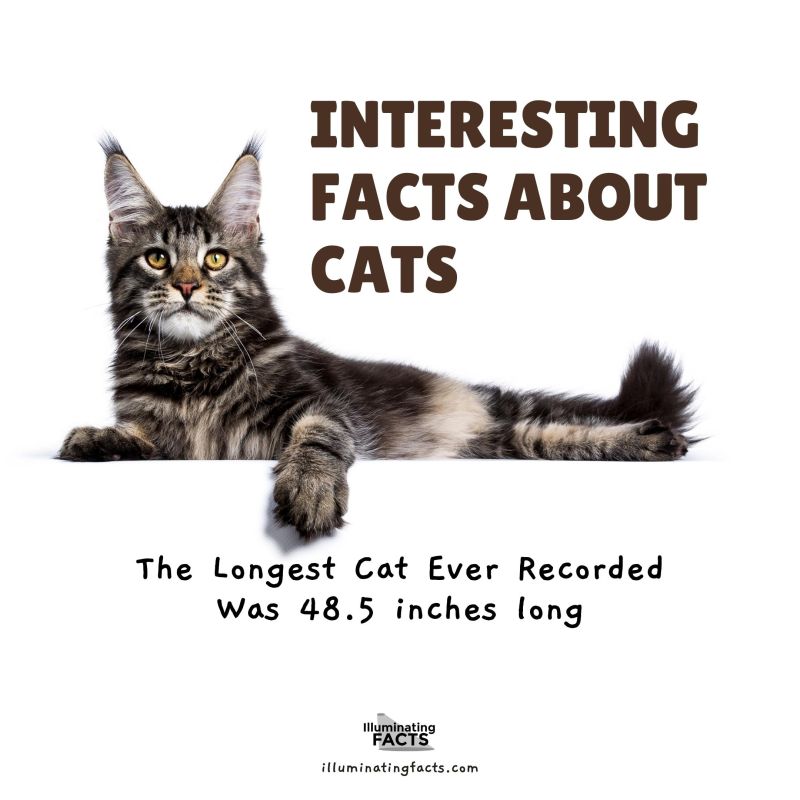 According to the Guinness Book of World Records, the longest domestic cat was Stewie, owned by Robin Hendrickson and Erik Brandsness (USA), measuring 123 cm (48.5 in) long on August 28th, 2010. Sadly, he passed away in January 2013 [15].

16. In 1963, Felicette—Nicknamed “Astrocat”—Became the First and Only Cat to Go to Space In 1963, a French cat named Félicette became the first and only feline to ever travel to space on the top of a Véronique AG1 rocket. She flew about 100 miles above the earth. She soared up to six times the speed of sound and experienced 9.5 G’s of force. Fifteen minutes later, she parachuted down safely in her little space capsule — alive and well [16].

17. A Famous Cat Named Crème Puff was the Oldest Living Cat Ever Recorded! Cats live to be between 12 and 14 years old on average. Most will live to that age or even slightly over if they’re healthy, well-fed, nurtured, and kept in a safe environment. However, the oldest cat in the world was 38 years old, named Crème Puff. She died in 2005 at the age of 38 years [17].

18. Cats Use Their Whiskers to Find the Best Spaces to Fit Into and “Feel” the World The whiskers are surrounded by sensory cells that transmit information similar to the signals our fingertips send to the brain. Cats feel the tiniest vibrations in their whiskers, enabling them to feel even the slightest changes in air movement and wind [18].

19. Cats Stretch Their Tails Out to Steady Themselves When They Leap or Walk Along Narrow Ledges The cat’s tail acts as a counterweight when he walks along narrow fences or chairbacks, and it helps him stay balanced as he turns sharp corners chasing prey or his favorite toy [19].

20. Americans Own 88 Million Cats — More Than Any Other Pet in the US! You may have heard that there are a lot of cats in this country. And that’s right—about 88 million pet cats live in the United States! (That’s more than the number of dogs, which is only 74.8 million) [20].  That’s because many homes have multiple cats, whereas most have only one dog.

That number has been growing steadily, no matter what dog lovers argue!

Our cats do so much for us, from snuggling on the couch to spying on the dog. But if you ask any cat owner, they can tell you about some of the weird and wonderful things a cat does. If you’re already a cat lover, you’ll probably find that most of these facts are familiar.

However, if you’re still scratching your head in disbelief over why exactly your cat climbs into your lap as soon as you turn on a steamy movie, this list of amazing facts about cats is for you!