US Presidents have played a major role in American history and world history as well. While some have been inspiring leaders, others have been downright corrupt. Did you know that it took 8 years to build the white house? Or that Abe Lincoln was the first President to be assassinated? There are plenty more interesting facts to read up on, so let’s find out more about the US presidents below:

1. John Adams signed a 1798 congressional act that created the United States Marine Band. This band is now the oldest active professional musical organization in the US The Marine Band has a long and distinguished history, having performed for US presidents and other dignitaries for over 200 years. It has even played at the White House for every president since Thomas Jefferson.

The Marine Band’s first leader was William Farr, and he was a drum major. It wasn’t until 1801 that the Marine Band officially became known as “The President’s Own.” [1]

2. James and Dolley Madison’s love of ice cream was so great that they had an ice house built on the grounds of their Montpelier estate. Dolley Madison was a great hostess and helped her husband James Madison get support from people in Washington. She often had music, elaborate dinners, and drinks at her parties. For dessert, she would serve oyster ice cream.

Until the invention of refrigeration, chefs had to rely on ice houses to store large chunks of ice and hand-cranked machines to churn out this dessert treat. So, the Madisons built an ice house on the grounds of their Montpelier estate and frequently served bowls of oyster ice cream at official government functions. [2]

3. Andrew Jackson Despised Banks and Made It His Mission to Defund the Second Bank of the United States (He Succeeded) On September 10th, 1833, President Jackson announced the federal government would no longer use the Second Bank of the United States. Jackson then emptied the bank by taking all its funds. The bank was operated by a board of directors with ties to manufacturing and industry and therefore was biased toward the urban and industrial northern states.

Jackson, who was known as a “man of the frontier,” did not like that the Second Bank of the United States was not supporting the movement into the Western territories with loans. He also did not like that the bank had political power and that Congress could not oversee their business dealings. [3]

4. Grover Cleveland was the First (and Only) US President to Serve Non-Consecutive Terms President Grover Cleveland was nominated as the presidential candidate for the Democratic Party after the Civil War in 1884. He was the only president ever to leave the White House and come back for a second term! His first term (1885-1889) was followed by a four-year break, and he was elected again in 1893 and served until 1897. [4]

After his second term, Cleveland left the White House and moved to Princeton, where he lived quietly. He died in 1908.

Washington had a lot of dental problems for most of his adult life. He lost teeth when he was young and even wore false teeth. However, instead of using wood to make his false teeth, Washington used all kinds of materials, including gold and ivory, teeth from humans and animals, and metal fasteners.

Washington received a set of dentures during the Revolutionary War. He might have also purchased teeth from his slaves and had an unusual tooth transplantation procedure in the 1780s. [5]

6. George Washington was the Only President Unanimously Elected by All of the State Representatives In the months before the presidential election of 1788, 11 state electors were chosen by legislative appointment, popular vote, or a combination of both. [6] John Adams (1797–1801), the second president of the United States, and Thomas Jefferson (1801–1809), the third president, died on July 4th, 1826. They were both quite old—Adams was 90, Jefferson 83—and both were ill when they died. But Adams had been in robust health until just a few months before his death, and Jefferson had been ill for some time.

Thomas Jefferson and John Adams had both served as president, but their political differences led to a fierce rivalry between the two men. However, they repaired their differences and started to talk again until their death. [7]

8. James Madison and George Washington Are the Only Presidents Who Signed the Constitution The US Constitution has been referenced more than ever in news programs and everyday conversation, but many people probably don’t know how many people signed it or understand how it works.

The number of signers on the United States Constitution is 39. This number may seem small compared to the document’s magnitude, but these 39 men changed the world forever. Only two of the 39 signers of the Constitution—George Washington and John Adams—would eventually serve as president. [8] Abraham Lincoln, the 16th president of the United States, had a great idea for storing important documents: he put them inside the crowns of his hats. Lincoln is also known to have been the tallest American President at 6 feet 4 inches. He was a wrestler and a licensed bartender. [9]

10. Franklin D. Roosevelt was the First President to Appear on Television during a 1939 Broadcast from the World’s Fair Franklin Roosevelt was the first-ever president to appear on TV. He delivered a speech at the 1939 World’s Fair in New York, which was broadcast to just a few hundred people in the New York area. FDR mastered the art of radio in the 1930s, and his “fireside chats” soothed Americans struggling with the hardships of the Great Depression. [10]

11. Teddy Roosevelt was blind in one eye because of a boxing match Restless, irritable, and feverish, President Theodore Roosevelt decided to use vigorous physical activity as a way to deal with his health problems. Teddy Roosevelt liked to box—he even boxed in the White House. He only stopped when his eyesight was permanently damaged by a punch from his military aide, Col. Daniel T. Moore. [11]

He is the only president who was buried in Washington DC. [12]

13. Andrew Jackson Was Shot In The Chest during a Gun Duel

Andrew Jackson was shot in the chest during a duel with Charles Dickinson. With a bullet still in his chest, the president managed to stay standing and shoot his way to victory. The bullet remained there for the next 40 years.

The feuding between Jackson and Dickinson involved horse racing and the southern plantation-owning families’ mutual hatred for each other. Dickinson called Jackson a coward and an equivocator, as well as accused him of reneging on a horse bet. He also called Rachel Jackson, Andrew Jackson’s wife, a bigamist. [14]

14. President Barack Obama Took Home a Grammy Award in 2006 for his memoir, “Dreams from My Father.” In his memoir “Dreams from My Father,” which was published in 1995, Barack Obama writes of his childhood growing up in Hawaii and Indonesia, college years studying at Occidental College in California and Columbia University in New York City, and years as a community organizer in Chicago before entering Harvard Law School in 1988. [16]

The abridged version was released in 2005 after Obama entered the Senate and became a presidential contender. It won the 2006 Grammy Award for Best Spoken Word Album. [15]

15. Bill Clinton Enjoyed Playing the Saxophone and was a member of a Band Called “Three Blind Mice” In High School Bill Clinton has loved playing the saxophone since he was a kid. He even played in a band called Three Blind Mice while he was in high school because they all wore dark glasses when they performed. Years later, Clinton would perform on The Arsenio Hall Show while he was President. [17]

16. Martin van Buren was the first president born within the boundaries of what became the United States Martin van Buren was the first president born in the United States. The seven men who held the country’s highest office before him were born in Britain. Van Buren arrived in the world six years after the 13 colonies declared their independence from Britain in 1782. [18]

Virtually everyone in Kinderhook, New York, spoke Dutch, so Martin Van Buren did too. However, he was the only president to learn English as a second language. [19]

17. John Tyler Had 15 Children, Which Is the Most Known Children by Any President Tyler was the father of 15 children—a record high among American presidents. He fathered eight children with his first wife, Letitia Christian. She died of a stroke in 1842, so the president married another, Julia, who bore him seven more kids. [20]

Tyler was devoted to his family. He especially loved his children, who were quite a handful. But Tyler’s love of spending money and inability to manage his rather large family left him deeply in debt. [21]

18. James Buchanan Was the Only Completely Unmarried President to Serve In Office 28-year-old James Buchanan was engaged to Ann Coleman, but their romance wasn’t exactly like something out of a storybook. Rumors swirled that Buchanan was seeing another woman because he and Ann didn’t spend much time together due to his busy schedule in Pennsylvania. [22]

19. Electricity made its debut in the White House during Benjamin Harrison’s presidency The White House relies on more than just hard work and long hours. Electricity plays a huge role in the daily tasks in this historic building.

For over a century, the White House was lit by candlelight. But beginning in 1891, electricity took over as the house’s main source of illumination. No one thought to turn the lights on and off, though: President Benjamin Harrison and his wife Caroline were afraid to touch the light switches for fear of electric shock. It was left to the staff to flit from room to room, turning each light on or off as needed. [23]

20. James Madison was the Shortest President 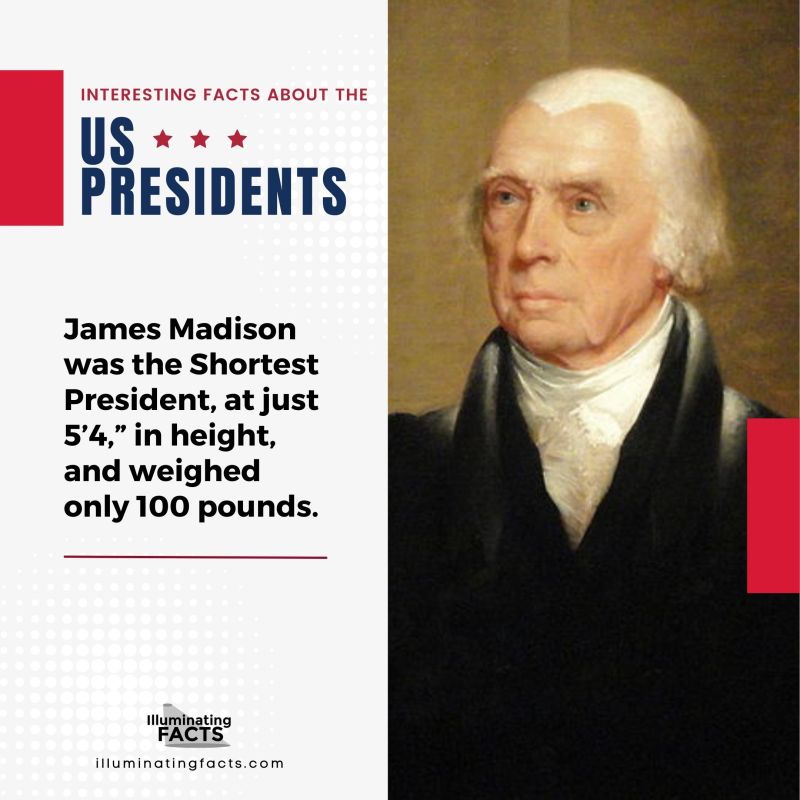 The fourth president was the shortest of them all. At just 5’4,” he weighed only 100 pounds. He was described as “fragile” by doctors (for most of his life), but he nevertheless led the country through a critical period. [24]

Isn’t American history fascinating? Fortunately, historians are there to dig up all kinds of amazing little nuggets of information about the US presidents that came before. They can tell us about the way the country was growing and changing, about the quirks of each particular president, and even the more scandalous details of their lives.

This list still only contains a small portion of some of the more interesting facts about US Presidents. Hopefully, now that you have been exposed to these interesting and surprising presidential facts, you have found the list to be entertaining and educational.